In 1921, 320 dairy farmers from around the Midwest founded a small creamery company in St. Paul, Minnesota. This company was called the Minnesota Cooperative Creameries Association. This is where the story begins.

From the genesis of this corporation, the founding farmers knew the name wasn’t franchise worthy and quickly sought to change its branding. Ideally, they wanted their company’s image to resemble Minnesota’s rich culture and history. So, they decided to call upon Minnesotans themselves. People from across the state submitted their ideas and drawings to the MCCA. Inspired by Minnesota’s official catchphrase “Land of 10,000 Lakes,” contestants Mrs. E.B. Foss and Mr. George L. Swift, sent in the award-winning name: Land O’Lakes, Inc. [1]

Once the name was chosen, Land O’Lakes needed an eye-catching logo. Brown and Bigelow illustrator Arthur C. Hanson drew the original Land O’Lakes design in 1928. It featured a fitting “Land of 10,000 Lakes” background that was chosen and designed to mirror the landscape and topography of rural Minnesota. [2] The original depiction, as well as the current logo, featured pine trees, a gorgeous lake waterfront, and a beautiful horizon. The goal was to create a hometown feel for a large, up-and-coming industry.

In the forefront of the photo was a Native American maiden named Mia. Mia was specifically designed as a young woman in traditional dress, kneeling in front of a lake, and holding a stick of butter in her hands.

Here, is a “vintage” photo of the original Land O’Lakes design.

Minnesota and Wisconsin were well known for their Hiawatha and Minnehaha lands, or, areas that found their origins with Native American folklore, spirituality, and culture. [3] One of these namesake stories, in particular, is the story of Minnehaha. Minnehaha is a fictional Native American woman whose name translates to “laughing waters” in Dakota. In Native folklore, she was the lover of the male protagonist Hiawatha, until she met her untimely death in Henry Wadsworth Longfellow’s 1855 poem “The Song of Hiawatha.” Some believe that the logo of Mia was a dedication to the tragic story of Minnehaha and the impact Native American folklore had on Minnesota culture and memory. [4] 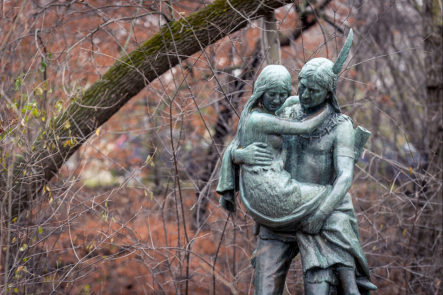 Artist Jacob Fjelde created this bronze statue of Minnehaha in the arms of Hiawatha. The statue is currently standing in Minneapolis’ Minnehaha State Park. [5] Minneapolis is also a combination of the Dakota word for “water” (mini) and the Greek word for “city” (polis).

Most Minnesotans, as well as the creators of the Land O’Lakes brand, knew Native American history and Minnesotan history went hand in hand (“Minnesota” translates to “cloudy/blue/sky-tinted waters” in Dakota). You can’t have one without the other. Some believe that Mia exemplifies and honors Minnesota’s rich history and current Native American communities. [6] Others point out, however, that the original design of Mia was to evoke an “aesthetic” effect of the Thanksgiving holiday season. In other words, by associating specific foods and brands with Native Americans, consumers would be more apt to purchase these products during the holidays. [7] Neither of these origin stories were confirmed by the company.

Over the years, the design was changed two more times. In 1939, the background was changed slightly but Mia stayed relatively the same. In the 1950’s, however, Native American artist Patrick DesJarlait was asked to redesign the famous Land O’Lakes logo.

Patrick DesJarlait was a local Ojibwe artist who was hired to revamp Mia’s depiction. Although claiming to be non-political, DesJarlait did publicly believe in fostering an open dialogue between Native Americans and non-Natives alike. So when Land O’Lakes approached him, he agreed, believing in the value of “fostering a sense of Indian pride” across the Midwest. [8]  DesJarlait wrote, too, that “each of my paintings tells a story about some aspect of [Native] life. It has always been my hope that my [works] will help to remind my people of their own heritage and that they, in turn, will inform other people about the traditional [Native American] way of life.” [9]

Here is a map of the modern Minnesotan, Indian Reservations (each written in bolded font above). Artist Patrick DesJarlait was from the Red Lake Reservation in the North West part of Minnesota. [10]

Today, Land O’Lakes prides itself on being a cutting edge, mainstream company. Land O’Lakes still stays completely farmer owned and self-sufficient in every state in the U.S. and in over fifty countries worldwide. Similarly, they have been promoting their innovative sustainability networks [11] and female farmer program “She-I-O.” [12]

Yet, some people today still have problems with the way Land O’Lakes portrays Native American imagery. For many modern Native Americans, these images are seen as “caricatures, symbols of the European-American narrative that ignores the genocide, disease, and cultural devastation brought to our communities.” [13] Many people also feel like whitewashed, American capitalism is still taking advantage of these images and cultures in order to promote a product or to prolong a racist stereotype.

With all these issues, plus with other unmentioned, controversial depictions of teepees, headdresses, and contested team names in sports (Redskins, Fighting Sioux, etc.), it is clear that this conversation about cultural appropriation is far from over.

Despite their new innovations, Land O’Lakes still stands by their original packaging. Now, however, they do this while taking a more “close-up” approach on the classic design. Mia is no longer shown kneeling or holding butter on the boxes and tubs anymore. Instead, just a headshot graces the packaging. 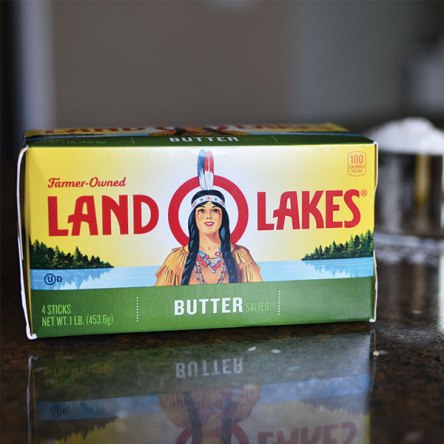 This is the modern Land O’Lakes design that can be found in stores today. [14]

[13] Trahant, Mark, and Daniella Zalcman. “Native American Imagery Is All around Us, While the People Are Often Forgotten.” National Geographic. November 20, 2018. Accessed November 21, 2018.