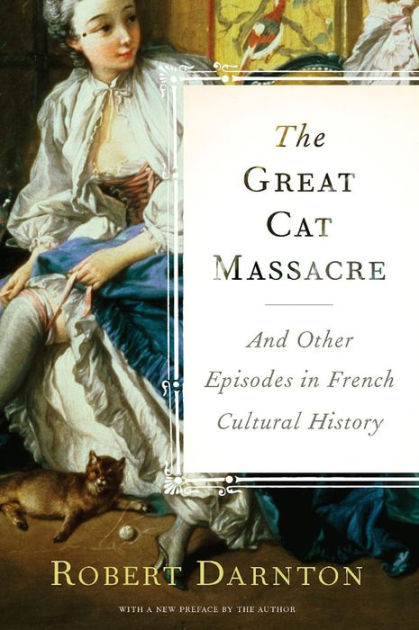 It may seem difficult to find a common thread between French folk tales, the slaughter of cats, a policeman’s records, and the writing and reading of intellectual theorists.  For Robert Darnton, that is the point. The Great Cat Massacre’s examination of seemingly disparate texts in Old Regime France (before the fall of the monarchy in the French Revolution) includes stories from various viewpoints and tiers of society. Darnton ties these strands together in a series of essays, arguing for the analysis of culture to understand the ideas that elites and commoners, intellectuals and laborers encountered in their daily lives in the eighteenth century prior to the French Revolution (7).

To achieve this, Darnton focuses primarily on how people thought—“l’histoire des mentalités.” He strays from previous Enlightenment histories that give import only to “high” culture and the publications of famous philosophers and concentrates on accounts of and by ordinary people. Darton makes a critical intervention by showing how scholarship of this period overlooks the possibility of “modern” ideas emerging from the lowest rungs of society. He further avoids a “total” history of interacting economic, social, and cultural tiers that react to produce class consciousness (111). Darnton contends that this method results in histories segmented by class, influenced by Marx and Gramsci, and disproportionately focused on the bourgeoisie.  The goal of the book is to approach its subjects as “the other,” without preconceived understandings of their class or worldview (111-112). For example, Darnton goes beyond the data recorded in a policeman’s report to consider the man’s writing for the stories he tells and their literary merit (154).

Darnton’s analysis is structured thematically, beginning with French folk tales (and comparable ones from other cultures), and finishing with a detailed correspondence of a merchant about the books he wished to purchase. He incorporates a literary element throughout the book. Darnton is preoccupied with what the French read and wrote (and the stories they told one another) in addition to why and how. He uses these texts and stories to gain insight into the thought processes of the people who produced and consumed them.  The questions of “why” and “how” are also applied to thought processes; in the book’s namesake chapter, Darnton’s entire goal is to “get the joke” of why printers in a particular town found the massacre of cats to be a hilarious and momentous event (62).  Throughout the text, he emphasizes that numbers and statistics are not paramount. Rather, he interprets the massacre as a symbolic method of societal commentary and a subversive insult to their employers (79). Symbols are important to Darnton, who critiques some of his contemporaries for being overcommitted to the Annales school of history and not invested enough in investigating the symbolic (257).

Throughout The Great Cat Massacre, Darnton argues for further application of anthropology in the study of cultural history to understand symbols. He borrows from anthropological methods and sources to approach his subjects with an expectation of culture shock rather than familiarity, attempting a detailed description of French culture, or ethnography from the perspective of a historian. His reading of ritualized events (such as the cat-killing) as texts reflect the thought of Clifford Geertz (3-5).[1] However, rather than reading events or objects from the era directly, Darnton looks at tales and descriptions in written form. He admits that he is unsure of whether he chose the “right” sources, but always considers them as embedded in the social or cultural world in which they were created (64, 262). For example, in one chapter, Darnton reuses a text he is already familiar with, the Encyclopédie (the topic of his 1979 study of the book’s publication). In The Great Cat Massacre, Darnton goes beyond a book’s physical origin to question its production of knowledge, its philosophical origins and directions, and the reasons its authors were perceived as dangerous. To achieve this, Darnton examines the Encyclopédie for what it symbolizes rather than what it says, searching for the “mentalités” of its authors, readers, and detractors.

Darnton concludes by advocating for a move toward anthropology in cultural history, or for historians to try to see things from their subjects’ perspectives and to seek out the “social dimensions of meaning” in what they know of them (260). In his attempt to get inside the heads of French citizens, he successfully uses a wide range of sources produced by different members of society. Darnton’s source base covers the actions and thoughts of people of different ages, religions, occupations, and socio-economic statuses. Darnton clearly attempts to distance himself and his prior knowledge of French history from the analysis. His familiarity with Old Regime France is evident, however, in his use of the cultural context to “get the joke” (62). His examination of how people thought about common problems raises questions about the importance of psychological theory—especially the section on folk tales. He rightly points out that analysts like Fromm and Bettelheim might anachronistically apply psychoanalysis to past tales. However, Darnton’s preoccupation with thought and symbols makes his exploration of Jung and the theory of universal archetypes (or alternatively the means of transmission of these tales from one locale to another) seem insignificant. This is especially true when arguing for the “Frenchness” of the stories he examines, which might not be as obvious to the average reader as to a French historian (10-11). This leaves room in the future historical study of thought and symbols for a deeper discussion of psychological theory. Just as he asks future historians to pick up where he left off in determining the relevance of cultural theory to history, decisions must be made about what psychological methods can and should be applied.

Darnton’s anthropological and historical analysis of the people in Old Regime France holds an interdisciplinary appeal. Yet, The Great Cat Massacre is of value to more than just cultural historians and anthropologists. Anyone with an interest in folktales, philosophy, law, or economy, will value and enjoy the critical intervention and artful prose of this text.